Writing with Lots of Kids

I was probably more efficient with my writing when I wrote in between the cracks. Now, I can while away huge amounts of time reading, not that there's anything wrong with it, except of course, when I should be writing, I still feel a little pang of guilt. Aren't I a becoming a good Catholic? :) 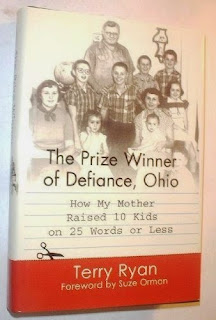 Well, I don't have a lot of kids, but that doesn't stop me from giving advice.  Let's see. 1. Keep a notebook and pen handy. 2. Play with words. 3. Read this book. THE PRIZE WINNER OF DEFIANCE, OHIO: How My Mother Raised 10 Kids on 25 Words or Less by Terry Ryan. I saw this at a library sale and always a sucker for a good human interest story, picked it up. What a woman! Evelyn Ryan raised ten children and with her flair for words won contests that kept her family fed and clothed and housed.

Her husband, Kelly, was an alcoholic. She states in a letter, "the liquor bill has been a ruinous drain on my husband's paycheck. Drinking has wrecked his disposition and made study and homework next to impossible for our children." Yet she persevered. Kelly once accused her of "being too damned happy." Right. She had wit, wisdom, poetry and prose flowing as she ironed clothes.

When her daughter Terry questions her about abandoning her promising career as a writer, this is what Evelyn says:

"I want you to know I don't regret any part of my life, including marrying Dad. I wouldn't trade any one of you kids for a whole illustrious career. Besides, without the ten of you, what would I do for material?"

On that same road trip (come hell or high water) Evelyn says, "There's such a thing as destiny ... Sometimes when your life seems most out of control, you know there's a direction. I don't mean you can't have free will -- in fact, that can be the most important part."

"So you were meant to have ten kids?" Terry asks.

"I feel that I'm doing exactly what I was meant to do in this life. I've never doubted it."

I am doing exactly what I'm meant to do. I've often lamented that I lost my faith, that had I not, I would probably have become a nun, but it looks like matrimony *is* my path to holiness. Maybe I would've been a terrible nun, picking fights with my fellow-sisters. Perhaps I had to have a falling away, a period (albeit too long) of darkness so that I could come back to the light. And how my children have brought me back. Every day they challenge me. And when they really try my patience, I'm fond of telling them, they're shortening my time in purgatory. Apparently, I'm shortening theirs as well :)

Anyway, I recommend this book highly. It is very inspiring and joyful. And ... there's a movie!!!!! We are definitely going to rent this one.

Terry Ryan writes: My mother continued to write almost until the day she died, her spirit and sense of humor unflagging to the end. A week before her death, I lifted a book from a chair at her bedside, and a small handwritten poem fluttered to the floor. It contained precisely 25 words:


Every time I pass the church
I stop and make a visit
So when I'm carried in feet first
God won't say, "Who is it?"

I haven't read the book (yet), but I recently saw the movie. It was hard to watch at times, especially the husband's tirades, but so inspiring in how Evelyn "bloomed where she was planted." One of my favorite parts in the movie is a really poignant scene with the daughter (which is a bit like the quote you have here). Okay, now I think I must read the book too!

I recall a mother of ten saying her favorite child was always the one who happened to ask her how she was that day... But I digress. motherhood itself, whether to few or many children, is as close as many of us come to sacred work.

NEver heard of that book, but she sounds a committed writer and mother. Kudos to all women who can accomplish both!

Wow, this made me teary-eyed! She sounds like a beautiful woman, to be able to still have such a lovely attitude when life has been rough.

What an inspiring book - - and an inspiring woman!! Years ago, after rereading the book and watching the movie for the umpteenth time, I yearned to take a pilgrimage of sorts to Defiance, Ohio. I just wanted to find one of the homes in which the Ryan family lived and leave some flowers at Evelyn's grave....

It didn't work out for me to go then, but I will someday. In the meantime, I continue to honor Evelyn Ryan each August 29 (her "feast day" - the day she died in 1998), thinking of her as the Patron Saint of Harried Mothers.....

So glad you mentioned her, Vijaya!!

I've heard of this but never read it. Thanks for the thoughts and review!

Hi Vijaya, I haven't heard of this book (or its movie), but I'll look for a copy. Might be the kind of encouragements I need right now even though I don't have children. "shortening my time in purgatory" ~ that made me laugh!

Jenni, that's so funny -- I've got to watch the movie, and you've got to read the book.

Mirka, what a lovely quote. Motherhood is definitely sacred work.

Carol, it's amazing how writing and mothering were so closely woven.

Leandra, I loved this book because she was "so damned happy" and never let circumstances let her down. Her unwavering faith and optimism made me smile all through the book.

Gretchen, I want to go on a road trip with you! And what a tribute to remember her "feast day". You are a true pilgrim.

Faith, Claudine and Johnell, you will enjoy this very much and laugh and cry. Very much like Cheaper by the Dozen, except sadder because the father was an alcoholic.