I'm fond of critters and subscribe to two blogs that satisfy my critter-picture-needs: The Daily Coyote and itty bitty kitty committee. On the Daily Coyote, there's a picture of a coyote, a dog and a cat all curled up together. Awwww, too sweeet.


I'm still waiting for my kitties to feel the love for the new pup. Today, I rested with the pup beside me and the cat on top of me. It took quite a while for the pup and kitty to settle down but it did happen. And then the kids came home and mayhem ensued ...

Here's a picture of the kitty tolerating the pup. How I wish I could capture the moments right before, with the pup sitting, watching the cat, tail thumping wildly, and the cat saying, "Don't you dare come any closer." 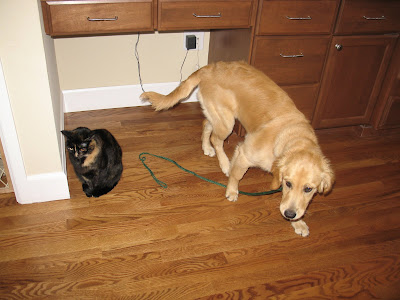 The pup is four and half months old now ... and how she's growing!

Allyson Schrier and Molly Blaisdell both got Letters of Merit for the Barbara Karlin grant (for picture book) and SCBWI WIP grant (YA contemporary) respectively!!!! Woo-hoooo!!!

I know, too many exclamations!!! But I can't help it. I'm so proud of these ladies for sticking to it and submitting their work and getting this recognition. Way to go!

Do It for Love

I just came across this advice from Walt Disney: "find a job that you like so much that you'd do it without compensation; then do it so well that people will pay you to continue."

Gosh, how this resonates with my life -- scientist, mother, and now writer.

A No Good, Horrible Weekend

I'm trying to get into the writing groove and finding it sooooo hard to do the revisions on my novel. Where's the love? I am not getting the same satisfaction from polishing a chapter as I get from polishing a short poem or article. When I work on a short piece, I can say that I'm finished. I don't see the end in sight for my novel.

The first half of the book is in decent shape. The second half, not. So I've decided to borrow a trick from my singing days ... start working on a piece backwards. Yes, I've sung Mozart and Verdi and Brahms and the only way to finish with a bang is to make each and every cell of your body knows the material. And you do this by working backwards. Because you practice, practice, practice getting to the end, you can finally not just sing the notes, but feel the music in your bones. That's what I want to accomplish with my words. As Dr. Green would say, "Once more, with feeling!"

I'm good at beginnings. I love writing when the characters are literally telling me the story and all I'm doing is transcribing. But characters are fickle. They stop talking (perhaps I'm not listening) or do something I'd rather they not do. Sustaining a story for fifty-sixty thousand words is hard. Making it sing (with feeling) is even harder. So, I'm going backwards, and I must admit that working on the ending has put me in a better mood. I'm leaving these characters in a better place ...

So what does this have to do with a no good, horrible weekend? Nothing, except, when the worst thing that can happen is twisting your ankle so you have to keep off your feet, ice it and rest, life's actually pretty good.

So, tell me, how do you fall in love again so that you can make your stories sing?
*
Posted by Vijaya at 1:37 PM 4 comments:

The first week of school went surprisingly well. I feel grateful that not all the extracurricular activities started this week. I only had to deal with soccer and football. Dance and piano will be added next week. I've been a lazy mother in the past. I mean, I didn't even take my son to preschool because it was so much nicer to hang out at home, throw rocks in the pond, weed the garden, and read books.

Then they got old enough for school. Kindergarten was a blast. And just for two-and-half hours. But when my son started Grade 1, my daughter missed him terribly. He was gone six long hours. I missed him too. I looked around for other kids, but they were ALL busy -- in preschool and other activities. There were mothers who tried to fit in a playdate between gymnastics and kindermusik. I said, No thank you. So I enrolled my daughter in preschool. I think it was good for her. She seemed to enjoy it. But she was happiest at home.

I tried avoiding organized activities for as long as possible, but two years ago, my son wanted to play baseball. He was seven, and I felt it was too early for team sports, but gave in. Well, I was right. These kids were happiest when each of them had a ball to toss. What a difference a year makes. Last year, the kids were awesome. Not only did they learn the rules of the game, but they worked together as a team.

My daughter is seven and plays soccer. She's improved tremendously. But I have a feeling that all these kids will play not just for themselves, but for the team, in another year.

I have turned into a suburban carpooling mom, schlepping kids to this, that and the other thing. I wouldn't have believed this about myself even three years ago. I miss our evenings together. I miss not having to hurry supper. I miss my kids.

We do have some downtime. We walk together with our pup. We take long baths. And when one is busy with sports, we have time to spend with the other. I cherish this one-on-one time.

And the bright side of school is that I have time alone to be with my own thoughts. Granted, this week I have been getting the house in order. I let a lot of things slide this summer, especially after getting the new pup, but I cannot think in such chaos, let alone write. I am terribly envious of people who can tune it all out and just write.

My mind is finally quieting down, and my story people whisper a few things now and then. If I don't pay attention, they whisper a bit louder. They're not yet clamoring to be heard but it's their time now. It's fall. And I want to fall into my stories again. Wish me luck.