Remember when I crossed over to the dark side? Well, this weekend I deleted my Facebook account. And I got several warnings about how all my data will be gone--lol, cat pictures :) They seem so dire! I have a whole month to change my mind. Haha! I doubt it. I've done the experiment, tried it for a reasonable length of time (3 yrs!) and have found it wanting.

I've been cleaning house, decluttering, so it's natural to do so on the computer as well. After weighing the pros and cons, I decided that the few things I will miss on FB--lovely pictures, private groups, etc.--do not justify being on a platform that hasn't actually made communication easier. The format doesn't lend itself to a thorough conversation as a public forum would. There are far too many advertisements and too much chatter (and I confess I've contributed to it as well). I must be the only person who doesn't like the "like" button. I question the value of an emoji without anything else for nuance. Cal Newport made a great case for not using it even if you use the platform. This summer, I took a hiatus for several weeks and then added back only a few things, as recommended in Digital Minimalism, but even so they weren't worth it. All the people whom I sincerely care for I already connect with via other means. And I'm available to anybody who wants to find me.

My children are grown and use all kinds of other social media. I'm not following them there; they know where to find me. I think I'll stay old-fashioned. Now, if only the rest of my house could be decluttered with a few clicks! As it is, I'll be doing a lot more writing, I mean cat-watching. They always come to my desk the minute I'm ready for some serious work, sit on my papers, and demand to be petted. 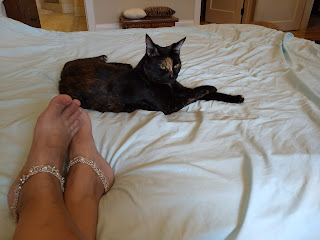 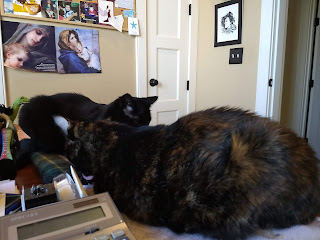 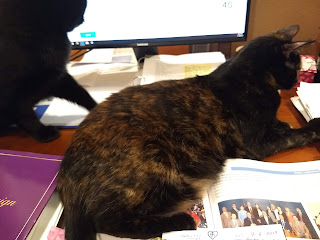 I am sorry and will miss you on Facebook. You're one of my few Likers :). Alas, we all must sever some connections and decide to keep others.
I avoid political comments as well as liking political comments on Facebook. Like Twitter, it's a miserable way to "converse" on such. But I have taken to Facebook as a way to communicate with people who are half a world away, and I have many such in my life. They are not people who would write to me or vice versa, but we knew each other back when and I love seeing what they post.
As to information mining, Google is the champ. DH won't use it, ever. I do. I'm too tired to worry about it. Unlike almost everyone I know, I don't have a smart phone, which is another device that help us bug ourselves. This brave new world is here already, and I'm not playing chicken with it for now.
You must do what you must do for your own peace of mind.

Mirka, thank you. Despite the posts I will genuinely miss on FB, esp. from family and friends far away, including you, we'll keep in touch through letters. It's true that some don't like writing, but I've found the interactions on FB less satisfying.

I don't worry about information mining--I happily supply plenty on my blog--but it's still a terrible thing to do. A few months ago, I heard the computer in the other room reading aloud an email that came in. I had to turn that thing off! Apparently one of the kids turned on some app or the other that reads to you...but I never said it could read my emails. Good grief! Yes, the brave new world is already here.

There is a grassroots movement in Catholic circles called the Benedict Option, coined by Rod Dreher, which is "pioneering forms of dropping out of a barbaric mainstream culture that has grown hostile to our fundamental values." I don't feel the need yet because of a rich community life. It's such a blessing. I wrote about his a few years ago: https://vijayabodach.blogspot.com/2015/10/blood-moon-beer-and-benedict-option.html

I've been too tired and swamped with homeschooling for much communication of any sort (I'm embarrassed at how long it's been since I've written a blog post or commented on anyone else's!)--but I'm often grateful that I never started Facebook...one less thing to keep up on. It does mean I rely on my more technology-savvy/appreciative friends to keep me updated on cousins, acquaintances, etc....but I'm okay with that. I know I'd get overwhelmed very quickly. Every so often, I'm invited to be part of a private group that I know would be beneficial, and I feel a twinge of regret--but I'm taking Cal Newport to heart, too. If my work is good enough, avoiding one platform won't hurt. I need to keep time in my life to improve my work. And--like you said--to communicate thoroughly and meaningfully!

Faith, you have nothing to be embarrassed about, nor should you feel you have to keep up with all that's going on--I don't think we're meant to. I'm amazed at how much you accomplish while taking care of your family. We can only develop and maintain close relationships with a limited number of people. I'm grateful that letter-writing is still acceptable and I have a lovely network of writing friends. I am not as isolated as people think. I'm spending more time building my local writing community and our little Latin choir. I've always been old-fashioned...and I'm beginning to think I'm also getting old :) lol Thank you for taking the time to read and post.