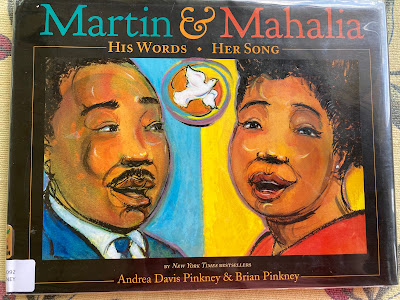 I've not been writing much but soaking up a lot of books this month. Three outstanding books: Martin & Mahalia: His Words. Her Song by the stellar husband-wife team of Andrea Davis Pinkney & Brian Pinkney. Beautifully written--spare, lyrical--and the paintings! Gorgeous! See for yourself. 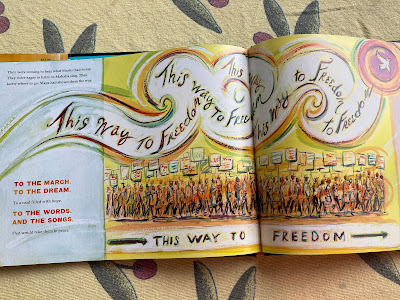 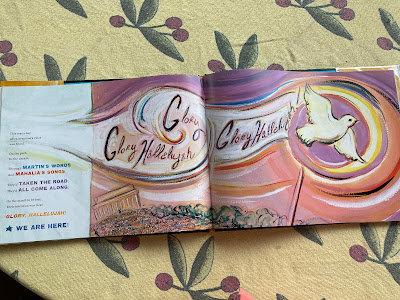 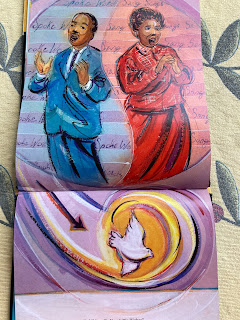 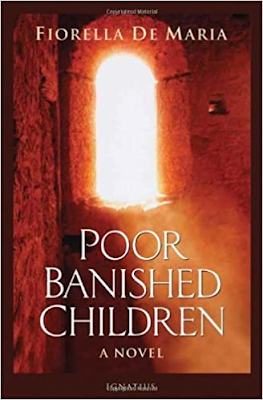 Poor Banished Children by Fiorella de Maria was an audiobook with fantastic narration. The long drive to Ave Maria and back was so much more enjoyable because of this book. I should take lessons from this author in never shying away from making characters suffer--it's the only way to test her mettle. It is a violent book, given the setting 400 years ago when pirates stole people and sold them into slavery. But it was the reality for so many girls 400 years ago who might be neglected, raped, or sold into slavery. Coming to think of it, this is happening even now. But the good Lord sends angels of mercy too. My favorite part was of our girl in the tender care of the priest once he realizes she's neglected. The author never descends into sentimentality but shows the action of grace, the power of prayer. Oh, it gives me chills thinking of the girl's last prayer uttered in desperation and how it was answered. And what a confession! I told my husband this is not how one confesses their sins, by confessing the sins of others that cause us to sin. Lol. But there's a powerful scene wherein a priest (a different one) offers to hear her confession because our girl is embarking on a perilous journey, but she cannot because she is not sorry and would commit this sin again. Much food for thought in this beautifully crafted novel of redemption. The title comes from the Salve Regina, which we sing daily after the rosary. To thee do we cry, poor banished children of Eve...and after this our exile show us the blessed fruit of thy womb, Jesus!

N.B. Salve Regina was composed by St. Hermann, who was disabled and so was given to a Benedictine monastery when the parents could no longer care for him. They educated him and he became a monk and contributed much to the sciences and the arts. What a treasure! 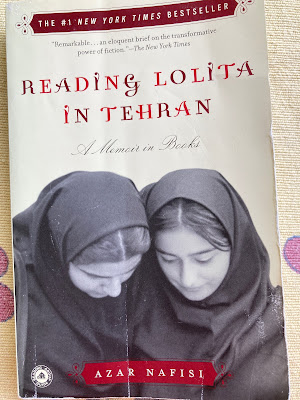 Reading Lolita in Tehran: A Memoir in Books by Azar Nafisi was such a timely book to read given how the entire world is becoming more oppressive towards its citizens in the name of Covid. Nafisi was a professor of Western and Persian literature in Tehran but slowly, slowly as the Ayatollah Khomeini came into power, freedoms were curtailed and society became repressive. Because I remember watching the news, it was interesting to get a retrospective view from inside, how different people responded. Nafisi took refuge in literature. “If I turned towards books, it was because they were the only sanctuary I knew, one I needed in order to survive, to protect some aspect of myself that was now in constant retreat.”

She kept teaching until she simply could not comply with the ridiculous rules. There is a brilliant episode in which her class puts Gatsby on trial. For that one bit alone, I recommend you read this book. “A novel is not an allegory...it is a sensual experience of another world. If you don't enter that world, hold your breath with the characters and become involved in their destiny, you won't be able to empathize, and empathy is at the heart of the novel. This is how you read a novel; you inhale the experience. So start breathing. I just want you to remember this. That is all; class dismissed.”

I truly enjoyed her analyses of books, even the ones I've not read. I must remedy that and read more of Nabokov. “Those of us living in the Islamic Republic of Iran grasped both the tragedy and absurdity of the cruelty to which we were subjected. We had to poke fun at our own misery in order to survive. We also instinctively recognized poshlust-not just in others, but in ourselves. This was one reason that art and literature became so essential to our lives: they were not a luxury but a necessity. What Nabokov captured was the texture of life in a totalitarian society, where you are completely alone in an illusory world full of false promises, where you can no longer differentiate between your savior and your executioner." 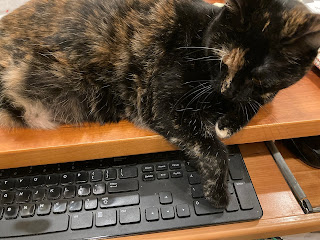 This book impressed upon me the importance of resisting any way we can when a government begins a turn towards repressing its citizens because it is a slippery slope from two weeks to stay home, stay safe, flatten the curve to Dokument, bitte. Nafisi writes, “The worst crime committed by totalitarian mind-sets is that they force their citizens, including their victims, to become complicit in their crimes. Dancing with your jailer, participating in your own execution, that is an act of utmost brutality.”

Fiction has so much to teach us. "what we search for in fiction is not so much reality but the epiphany of truth.” Happy reading and writing, folks. I have a faithful companion for both. Do share the good books you're reading.

So lovely to know you've read Nafisi. It'll stay with me a long time.