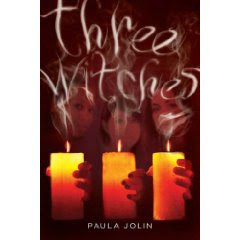 Isn't this cover gorgeous? I thoroughly enjoyed reading Three Witches by Paula Jolin. She had told me about the premise a couple of years ago -- three girls conspire to bring a dead boy back to life -- and I've been waiting to read it ever since.
*
The three girls are very different. Aliya is Syrian Muslim and the dead boy's girlfriend. Gillian is Trini and doing a business with him and Miya is Japanese, who said many harsh words to him the night he died. The book opens with Aliya and I must admit she was my favorite character because I could literally step into her shoes. But all three girls resonated with my teenage self who did dabble in the occult with extremely disappointing results. Oh, how I wished for power and control over my life. I think Paula captures that essence so well, because every teen has these feelings, even those not interested in witchcraft.
*
As always though, it's the characters who drew me in. These were smart, sassy girls and even if I didn't agree with them, I wanted to know what they were up to. I wish the boy were as compelling as the girls. In fact, the more I got to know Trevor (the boy who died) the less worthy he seemed. But I chalk it up to teens lacking good judgment. The plotting is excellent and the three viewpoints of the girls make the book richer. The ending is deliciously ambiguous, but oh, the possibilities! I think teen girls will swoon with the idea of harnessing all this power -- to make a boy fall in love with you, or finally shut up someone who's been tormenting you. But as an adult, I wondered about the consequences of such power.
*
On the opposite spectrum of power, I read Rosie and Skate by Beth Ann Bauman, which is about two sisters and how they cope with their alcholic father who ends up in jail. What struck me is how realistic this book was. These girls have no power to stop their father from drinking, save their love, but even that's not enough. And deprived of a father's love, they go looking for love in the arms of boys.
*
The writing is flowing nicely with a single viewpoint. At times, I'm shocked at how real these story-people are to me. I'm interested in all the details of their lives. For the first time, I'm writing way more than I usually do in a first draft. Typically, I'm a bare bones type of first drafter because I'm telling myself the story and being impatient, I rush through things. But now I spend time on inconsequential details. I will be doing some serious hacking in my second draft. But for now, I'm enjoying watching the movie play in my head and transcribing it.
*

Sounds like an interesting book. And I'm SO proud of you and your noveling!

This book sounds great! All the way through your review, I found myself interested, but when I found out about the ambiguous ending, I was absolutely sold. This is one I will do my best to look out for: I love ambiguous endings, and I know from personal experience how hard they are to write (sigh...)

And yes -- good for you for writing so much. Our internet connection has been so tenuous, I've been driven to do this myself!

Like Mary says, Bish, ambiguous endings are very, very hard to write and Paula has plotted it very carefully to make it so.

Thank you both for cheering me on with my writing. Today in church, I was in tears as the priest gave his homily because for the first time, I know I am meant to write.