Tell Me a Secret 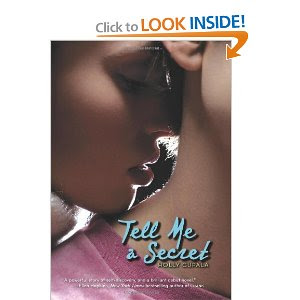 It is always such a pleasure to read a book by a friend whom you've watched grow. Holly Cupala's Tell Me a Secret is a stunning debut. The writing is excellent, with characters that ring true -- not just the main character, but even the minor ones who make their appearances for just a few pages.

This is not just a teen pregnancy book. It's about a girl trying to discover her true identity in the shadow of her more flamboyant sister's death. It's also about toxic friendships. This is the aspect that interested me. It seems many teens don't discern people well, or even if they do, they still choose the wrong people to be with, for the wrong reasons.

The ending was honest, if not bittersweet. How I wish everything could've been tied up with a pretty bow, because sometimes that is what happens (see a post below with a baby's picture).

I was particularly impressed with how well Holly ties all the plots and subplots together and I was pleasantly surprised to see that the cast of characters were not all white, without race being an issue. Very nicely done.

So, thank you, Holly, for writing one of the best contemporary YA books I've read in some time.

A title like this begs for a secret to be divulged ... hmmm ... I once did not wear underpants to school. We were at the bus-stop and my sister for some odd reason, lifted my tunic and told me run home and put them on. She'd make the bus wait. I did as I was told. After all, I was only five.

sounds facsinating! I'll have to check it out!

This sounds good, Vijaya. I'll have to pick it up. Besides the book sounding interesting in general, I love a skillful tying together of all the plot elements.

Marcia, this book is very skillfully written. Lots of flashbacks too, and done deftly. This is a book I might pick apart ...

I really want to read this now. To be honest, when I first saw the cover, I assumed this was a vampire book -- the mouth near the neck did it for me. Now that I know it's not a vampire book AND it has your endorsement, it's definitely on my list.

My daughter and I read The Bad Mother's Handbook some months ago -- that also features a teen pregnancy and I thought it was dealt with well.

Mary, the cover was not to my liking either ... too dark and vampiry ... but with vampires being so hot, maybe this was the reason why the art directors chose it. Who knows? Did you read the discussion about Cindy's cover? I loved the original. Pink and bold. But they're making it darker and ambiguous for the paperback.

I'll have to check out Bad Mother's Handbook.