We had a visiting priest from Vladivostok, Russia this Sunday at Mass. Sometimes it takes an outsider to preach the truth, we are so complacent about the rights we take for granted in this country.


Fr. Myron spoke about the terrible toll abortion-on-demand takes, not just on the babies who lose their lives, but on the women. He cited the statistics. An audible gasp came when we heard the number eight. The average woman in Russia has eight abortions. He asked, what does this do to a woman? To kill her own child. It destroys marriages. It destroys society. It destroys her soul. And men are not immune. Right now older men have the highest rate of suicide. Why? Because 80% of marriages fail and the men get old and have nobody to take care of  them. There is no family. Oh, the government talks about social policies and what-not, but family is the unit of society and with the destruction of family life, old men commit suicide. He spoke about China's one-child policy and Europe's contraceptive mentality and how these societies are dying ... dying because they have no children.

He spoke about the lack of religious freedom and I'm so glad he made clear that it's not about freedom to believe whatever you want in your head. You can do that in any oppressive regime. But in a free society, one must be able to practice faith in the public square. You cannot say, go worship in your temple and mosques and churches, but don't bring it out into public. No, religious freedom means that you can gather in schools and places of work and talk about God and religion. That you should be able to pray at a football game. Those who do not wish to pray do not need to. It means you should not be forced to do things that go against religion.


This is where I am surprised at people who say they are Catholics, and say they accept the teachings of the Church, but do not practice it. There should be no disconnect between your faith and your life. If you believe that life begins at conception and is sacred, how can you support a law that says it is okay for a woman to snuff out that life?


Fr. Myron asked, you don't think we could become a country like Russia, with abortion-on-demand, where you cannot practice your religion? Think again. Politicians slowly eroded all religion from a nation that was Christian for 900 years. It can happen here, too. If we let it. If we elect leaders who do not have our country's best interest at heart. Vote carefully, with your conscience. Do not simply choose the leader because you belong to a particular party or race. Choose the leaders that will preserve your basic rights. The first of which is the right to life. All other rights stem from this first principle. 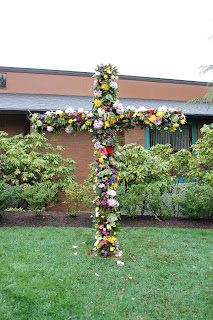 Here is a beautiful song by Matt Maher about turning around.

Below is help for those who are suffering:

And know that you can go to your parish priest for confession and absolution. It is one of the sacraments of healing. It can restore you to a full life.

Pray for us, O Holy Mother of God.

Wow. I gasped, too. I can't even imagine the pain those women must have gone through and be going through...

Thoughtful and soulful, Vijaya. As always.

Yes, I cannot even imagine the devastation. Sadly, people say that contraception is the answer, but it promotes sexual promiscuity, the very thing that is ripping families apart.

I remember the sadness in folks' eyes when I spent time there (then called the USSR), and now know it was not all economics. We should all still pray for the conversion of Russia like Our Lady said to do at Fatima. Thanks for the recap--I missed this homily! I enjoy unwinding, reading you blog.

Mara, you were up late!!! Thank you for stopping by at my cyber-home. Have some tea!

I didn't know you visited Russia. We had a few postdocs in our lab from there ... I agree about consecrating Russia to our Lady.