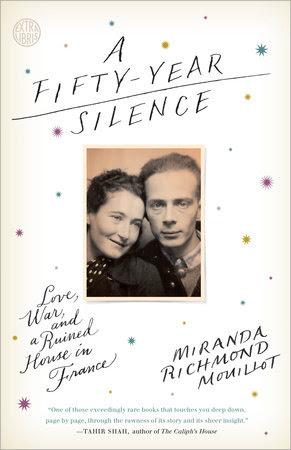 A Fifty-Year Silence:Love, War, and a Ruined House in France by Miranda Richmond Mouillot was an unusual memoir. Slow-moving and rambling, it is not a book that you eat, but rather savor, like memory itself. The author’s beautiful voice carries the book even though the central mystery – why her grandparents separated after the war and didn’t speak to each other – isn’t even really a mystery. Miranda is the grand-daughter of Holocaust survivors and she recalls her childhood, how uncertain she was about her home, her family, as if they could be ripped from her any moment. She is close to her grandmother, Anna, who was my favorite person in this book. Her joy and optimism even in the bleakest of moments is something to behold. Miranda's grandfather, Armand, is someone she gets to know later, in her teens when at the encouragement of Anna, she spends a year with him in Geneva. He’s a cantankerous and fastidious old man, and one has to wonder how the two even fell in love given their different personalities.
I’ve always been interested in Jewish holocaust stories and this is the only the second book I’ve read about people who managed not to get deported to the death centers. Miranda has been taught to carry the weight of remembering, being the only grandchild. So I took the journey with her as she dove into archives and tried to tease out the stories from her grandparents. I especially enjoyed the series of miracles that saved both Anna and Armand from death. And one can see how these terrible circumstances bind people together, because to love one another is all one has sometimes. But after the war, they led very separate lives, a pregnant Anna, working as a physician, and Armand working as a translator at the Nuremberg trials. Miranda concludes that what he learned at those trials couldn’t coincide with a world in which there was love. It was trauma he had no words for. There is no fairy-tale ending (oh, how I wanted one) but there was closure. The very house that Armand and Anna bought, brought Miranda’s husband into her life.
The writing is superb! I did find the self-absorption of the author a bit tedious, but she was trying to discover herself and she’s honest about it. I imagine this book will become a family treasure and I hope she has a big family so that the weight of stories isn’t so heavy.
Thanks to Blogging for Books for providing a review copy. I am also posting it on Amazon.
Posted by Vijaya at 1:12 PM

Thanks for your interesting thoughts on this book, I'd wondered how it was. :)

Wow. A deep read for sure. Thanks for the tip.

This sounds like a difficult and emotional read, but well worth it. Thanks for sharing!