The Safest Lie by Angela Cerrito

Ever since I was 10 years old and I read the Diary of Anne Frank, I’ve not been able to stay away from Holocaust stories. I always prefer a survival story but I also realize that for every one of these, countless others have died. 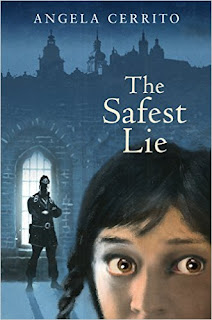 I learned about Angela’s book many years ago when she won an SCBWI grant to conduct research in Poland on Irena Sendler. Her story is woven into the fictional story of a young Jewish girl, Anna Bauman, who is smuggled out of the ghetto with a fake identity. She learns to behave like a good little Catholic girl, never forgetting that she is Jewish.


THE SAFEST LIE is a fast-paced book (just look at that suspenseful cover), covering four years of Anna’s life, from the time Jolanta (alias of Irena Sendler) meets with Anna’s parents to the various safe houses and convent that Anna goes to, until she settles with a foster family who love her unreservedly. But danger lurks everywhere and it is a miracle her true identity is not discovered. The ending is heart-rending. Once the war is over, the children are returned to their families. Most do not survive the ghetto because they've been taken to death camps. For the children who were babies when they were smuggled out, all they know is the Catholic faith, so it is a shock to learn they are Jewish. Angela Cerrito is a powerful writer who bears witness to the trials of these children and the many people who took great risks to save them. Thank you so much for writing this book, Angela.
This is the second book I’ve read that addresses the retention of religious identity during an adoption (the first was Rory's Promise). In the case of these Jewish children, it was impossible to place the children with Jewish families since they were all in the ghetto. So they had to learn how to behave like Catholics. Anna, being older – she is nine in the beginning of the book – remembers her parents and particularly her grandmother’s Yiddish sayings. She embraces the Catholic faith and at the end, knows how easy it would be for her to forget the faith of her people, but she doesn’t. She hangs on.
We also wonder about the morality of lying and it is clear that lying to protect the innocent is perfectly permissible. The Vatican issued thousands of fake baptismal records to save as many children as they could.
I can’t help but think about the Planned Parenthood exposé, which was obtained because the folks conducting the interviews pretended to be from a research company. However, since many babies’ and mothers’ lives will be saved, this lying is for the greater good.

It should come as no surprise that the arguments for the Holocaust, slavery, systematic genocide and abortion have much in common. It's evil couched in terms that make it sound like progress. They don't call the devil the father of lies for nothing. Ye shall be like gods, he said. And we bought it.

"We all want progress," says C. S. Lewis. "But if you're on the wrong road, progress means doing an about-turn and walking back to the right road; and in that case, the man who turns back soonest is the most progressive."

I'll stop rambling now. Read and share THE SAFEST LIE with your children. A mature 8-year-old can handle this but I would wait until the child is 10 if the child is sensitive. But know that this book focuses more on the goodness of people's hearts rather than the evil.

I will close with a quote from Anne Frank: It's a wonder I haven't abandoned all my ideals, they seem so absurd and impractical. Yet I cling to them because I still believe, in spite of everything, that people are truly good at heart. It's utterly impossible for me to build my life on a foundation of chaos, suffering and death. I see the world being slowly transformed into a wilderness, I hear the approaching thunder that, one day, will destroy us too, I feel the suffering of millions. And yet, when I look up at the sky, I somehow feel that everything will change for the better, that this cruelty too shall end, that peace and tranquility will return once more.

Yes, Anne, I hope and pray too. Requiescat in pace.

I know, personally, two such child survivors who were "passed" as Catholics during those wicked years. Of course, there is the history of false conversion to avoid the expulsion from Spain in 1492, though those were about saving their homes and not their lives. The thing they have in common is our species capacity to inflict misery and mayhem on one another.
If you haven't read THE ISLAND ON BIRD STREET by Uri Orlev, it is an amazing Holocaust survival story very close to the author's own real life ordeal.

This sounds amazing--I'm going to have to request it from the library, now that my self-imposed library ban is over. :)
So, lying is complicated...Technically, we are permitted to withhold the complete truth from someone who is not entitled to it--and in some cases, such as protecting the innocent, this allows for deception. These instances of protecting the truth aren't seen as lying, as such. But it's still a debated issue (it was the "hot topic" amongst theology scholars when I was in college), and always has been a tricky moral challenge for believers. (I guess that's why it's SUCH a great moral question for characters to face in a book!)
Have you read The Hiding Place, by Corrie Ten Boom? There's a very moving scene where Corrie's niece, determined not to lie, tells German officers that her draft-age brothers are "under the table"--they're in fact in a cellar whose trap door is hidden beneath a rug, under the table. The officers peek under the table, and then, feeling they are being ridiculed, leave in a huff before even lifting the rug. The niece and her mother were convinced that their loyalty to God's commandments saved them...(but of course Corrie, also a very devout believer, was convinced that God saved them despite their abundance of innocence, rather than because of it).

Mirka, thank you for that book rec. I'll look forward to reading it. Alan Gratz has a new book too on Prisoner B-####.

Faith, we've been debating lying at home, under what circumstances it would be okay, so your comment is esp. helpful. Yes, I've read The Hiding Place and that scene is so powerful. The way I see it, if the Gestapo came looking for Jews, if you lie to protect them, it is really a half-truth. There are no Jews here ... for them!

Happy reading, you two. It is a wonderful book.

This sounds like an amazing and powerful book. As for lying, we've used these sort of situations (how people lied to the Nazis) to teach our boys that if you're standing against evil or protecting someone, it's okay to lie. I also liked hearing how the SCBWI grant helped the author do the research for this one. Your quotes from C.S. Lewis and Anne Frank really touched me as well.
I'll be definitely checking this one out!

Wow. This sounds like a fantastic book. I'll admit, these books are hard for me. I tend to shy away from them, but I shouldn't.

I think it's a safe bet to say this book would leave me in tears! I need to start building a library of books like these, that focus on real, but terrible times in our history. I want my son to read literature like this when he's old enough. I can still remember how affected I was by Phoenix Rising by Karen Hesse as a girl.

Jenni, this book definitely provides a lot to discuss.

Johnell, one thing I love about children's books on difficult topics is that they always end on hope.

Leandra, I think the first *hard* book we read together with our kids is Where the Red Fern Grows. There were tears, but they were cathartic.

Thanks for the reminder about this book, which I plan to buy and read.